Books and literature are an important part of the bilingual home, particularly when introducing the language for the first time. However choosing the right books can be daunting, especially if you don’t speak the second language fluently.

Part One: Bilingual Baby – How To Introduce A Second Language At Home

Reading in a Second Language

From the moment you decide to read in your second language you should be speaking that language. Learn some simple phrases (eg lets read this book together, will you sit in my lap, can you turn the page) and use only the second language until the book/session is finished. Its a good idea to prepare ahead and make sure you know the story well and can ‘chat off the cuff’ with baby about the pictures. When it comes to a second language it is especially important read with you child not at your child since language is about relationships.

When you’re a parent who doesn’t speak a foreign language there are some things to look out as you select your written resources;

Books should have simple language and use vocabulary that is relevant to your daily lives, there’s no point reading about woodland creatures if you live in a city. Ideally aim for books with high levels of repetition, it is much easier for a child to isolate words when they hear them over and over. Be honest about your language skills, you need books you can read and understand easily otherwise your child will sense your discomfort and see the second language as something that is too hard even for brilliant people like their parents!

You’re going to need a lot of books that will grow with your child and their language skills so try to go for something that is part of a series or brand. The more well known the series the more online resources there will be to support you as you practise the text.

Choose a book with an instantly recognisable character and aesthetic, this means that as soon as your child sees it they will start to mentally prepare for their second language. There are so many wonderful children’s books available in every language however it is best to isolate the second language so that the child doesn’t become overwhelmed and confused. If only one or two characters speak Spanish it is easier for them to compartmentalise their languages. 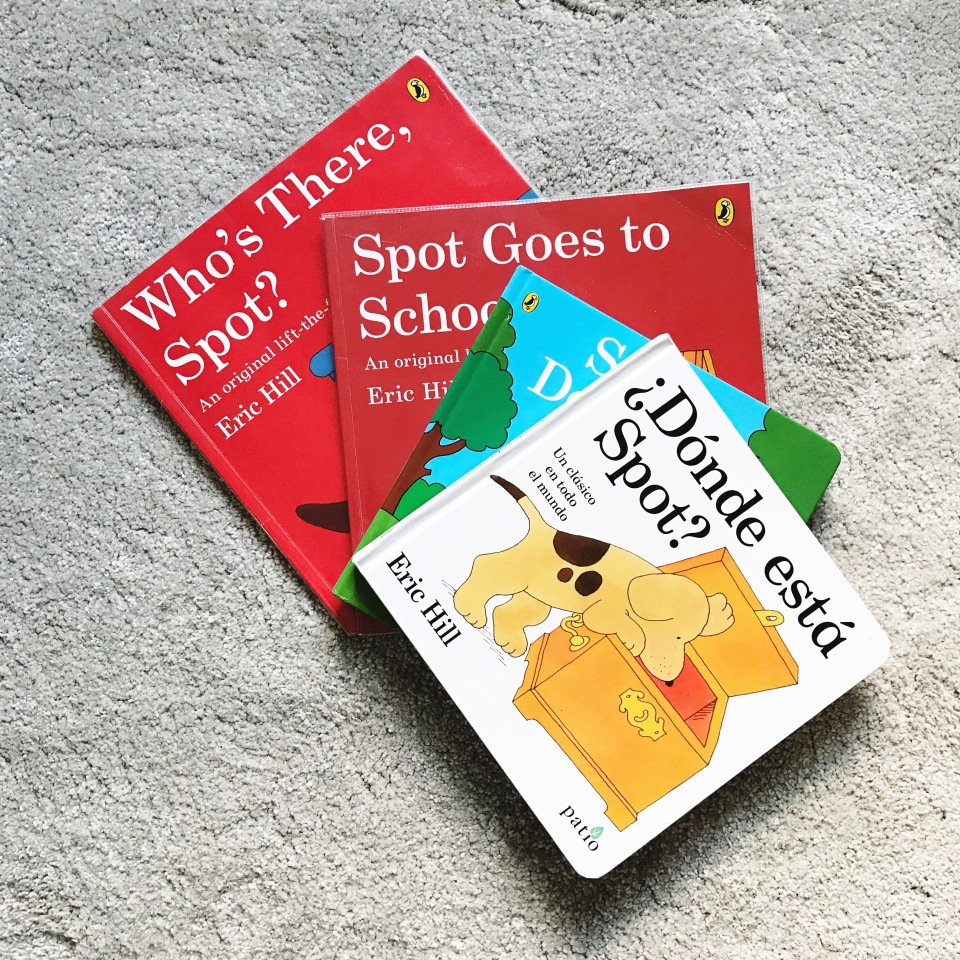 I’m now going to move away from Montessori and suggest two series that I find are both excellent for Monolingual Parents introducing a second language to their home (then I’m going to duck behind my laptop because Montessori Moms everywhere will hate this!!)

Spot The Dog by Eric Hill is an ideal second language character however the cartoon dog who lives in a house and is friends with a hippo called Helen is as far from Montessori as you can get!

Maisey Mouse by Lucy Cousins is a similar travesty of Montessori ideals but another good range for second languages.

These are great because both are widely published in most languages, both use very simple and relevant words, both are the characters and their environments are instantly recognisable, there seems to hundreds in each series and you will find lots of videos of fluent speakers reading both on YouTube.

For monolingual parents the goal is not to establish fluency but to build a strong phonic foundation to make sounds and structures familiar to a child and enable easier future learning.

To see more from Fred, Ted and company and other inspiring Montessori homes join us on Facebook. We’re on Instagram too if that’s where you’re happier.

Bilingual Baby; How to Raise a Bilingual Child – Montessori Resources from Birth to Three Years

Bilingual Baby – Getting the Most from Digital Resources

Hello and welcome! I’m Ted, a Mother, a Reader and a Montessori Believer! Here you'll find how we're using Montessori at home and all the ways that we try to celebrate the joy in every day (mostly with books...